I've been meaning to get around to reviewing my stovetec wood/charcoal stove for a while and today seemed like the perfect day. Not too hot, not too cold, besides it was working on lunch time and I was hungry.

The stove design is called a rocket stove, which is an old yet highly efficient design that works well with limited amounts of fuel. In it's simplest form it's an L shape, the fuel is fed into the horizontal tube, the fire burns in the bend, and the pot is set on top of the "chimney". I've made them out of rocks, cinder blocks, firebricks and they work well, although not as well as a self contained stove.

Self contained rocket stoves have the L inside of a container, and the space around the L is filled in with an insulating material. Dirt, air, rock, etc. My stove is built in a steel bucket, it uses ceramic tiles as both the insulation and to form the chamber, it has a cast iron grate under the fire and a second door under that to allow the fire to breathe and to make cleaning easier. It has a cast iron plate at the top to set the pots on, which is nice. I've seen other stoves for sale, and think they're design is just fine, but I chose mine for it's price, free shipping, and for it's looks. (more on that later) 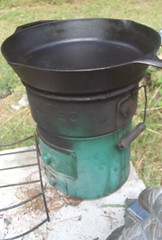 This is my stove. I bought it here http://www.stovetec.net/us/index.php and I've had it for going on a year and a half now. You can see the two doors, one larger and one small one on the bottom. The larger door has a ceramic insert behind it that insulated the door from the fire when using charcoal, you remove it and feed the fuel through the door when you're using wood. They don't make this model any more, now they have more expensive "deluxe" models with the ceramic insert attached to a heavier duty door. I believe that they still have some of the older single door models left at a decent price, but I do like the new models a lot and I would probably go for one of those given the choice.
It's not very big, the skillet sitting on top of it is a 12" lodge skillet, but I've cooked on it with some enormous pots and it was not tippy, it felt very solid as long as it was on a level surface. The stove came with a sheet metal adjustable ring that goes around the edge of the stove top and the bottom of the pan is supposed to sit down inside it, this forces more of the hot air to pass up over the edges of the pot. Unfortunately because it fits to the edge of the stove it also limits the size of the pot that you use with it. When I cook with a large pot I use a double layer of aluminum foil and it serves well enough, although it has blackened the paint on my stove. Besides that the only problems I've had are handling the insert when it's hot (which has been addressed in the new model) and the cast iron top has started rusting. For the first two months that I had it I greased it up every time I used it and got as good of a coat of seasoning on it that I could. It lasted rust free sitting in the yard for most of a year until Irene came through and it got a pretty good scouring with the wind and rain. Since then it's developed quite a bit of surface rust so I'm going to have to take a wire brush to it and work on seasoning it again. That's really more of an annoyance than a problem, and something that could have been avoided fairly easily if I had remembered to bring it inside.

When I was looking at rocket stoves I had narrowed down my choices to the Stovetec and a Grover rocket stove http://www.stockstorage.com/. Besides the price and free shipping the stoves are about level on performance, and one of the main deciding factors was appearance. I wanted a stove that I didn't have to worry too much about growing legs and walking off. The stovetec pretty much looks like a green metal bucket sitting next to the house and doesn't attract attention or curiosity. It weighs in at around 20 pounds so it's fairly portable too, and if you had to leave it unsupervised, tip it on it's side and kick some stuff over it and I'm pretty sure it would escape scrutiny even in the middle of the woods. Now, the Grover company does make a small wood burning tent stove and a removable baking oven that sits on top that I covet. I've heard good things about their stoves and I've added those to my list of someday supplies but the stovetec is what works for me in my budget.

Here I have filled it with kindling, I used some random sticks from the yard, a pine cone and pine needles. Normally I put the needles and cone down in the chamber and put the sticks on top of them but I felt like being different today. It works either way. The directions say to have the pot on the stove when you light the fire, but I find it more difficult that way. Your mileage may vary.

These two sticks are all I think I'll need to cook lunch. That's it. The branch was about 1.25 inches in diameter, about 16 inches long, the oak split was about 2 inches wide and quarter to half an inch thick at the wide end, it tapered to a point and was about 14 inches long. It's very economical on fuel, and you don't need a chainsaw to feed it.

Here you can see the sticks are catching nicely, along with a little bit of kindling that hasn't gone up yet. The stove came with the wire rack that they're resting on, and the orange thing with the burnt spot is the ceramic insert for using charcoal that I mentioned earlier.

The pan was hot about five minutes later, so I threw in some onions and red peppers and covered them to sweat down. We're making an omelet.
It took about ten minutes for them to soften up and it's almost time to add the eggs, so I lifted up the sticks and broke the coals off the ends inside the stove, then laid them on top of the coals to get a bit more heat going. While the new ends caught, I beat up the eggs and poured them on, then turned around to get the cheese. Which was now missing. Can't take your eye off anything around here. *sigh* I ran into the house to get more, and layered it on.

Looking pretty good, yeah?
All in all it took about 40 minutes of actual burn time to get lunch cooked, and I did add a third stick in the last few minutes. There was plenty of wood left to finish the omelet, but I wanted to make sure I had enough to burn the pan clean without having to relight it. Now, I could have had lunch done within a similar time frame to cooking on a burner by using 3-4 sticks but I wanted to show you just how efficient this little stove is.

So that's my stove. I think it's a very good shtf prep because it makes economical use of renewable fuel that's easy to find and easy to gather. Heck, you could probably tote enough fuel with you for a week of dinners if you're frugal.
I've started fires in a drizzle with branches broken off from inside my pine tree and it was fine as long as the pot was on it and the drizzle wasn't being blown into the fuel/air doors. I've used it in good breezes, I've cooked on it, canned on it, used the big heavy pressure canner, I've even tossed on a bit of damp wood to get some smoke flavor going on, and have used it to cure my cast iron, and it's done everything I've asked it to. I'm very pleased with it. At 20 is pounds it's not highly portable but it's not out of the realm of possibilities if you have enough people in your party to spread out the weight of the rations of the person packing it. I did have some initial concerns over the ceramic bricks inside it regarding cracking if it falls over, or gets overheated but they've held up pretty well even with my teenager banging it on the concrete blocks I have it set on to clear out the ash. I suspect that even if they did crack or break as long as the bricks remain in there it would still work, just less efficiently.

There are other brands available, and there are plans for making them yourself out of things like soup cans, duct work, barrels, pots etc. if you prefer to DIY. I've been eyeing some plans for building a larger permanent one on the back patio but haven't decided if I need it.

As for my missing cheese, I grilled my assistants about it.

Roxy, did you take my cheese?

Cheese? There was cheese? Hmmm...

As you can see by my wild ear-do I was too busy chasing squirrels and barking my head off at the UPS truck to be the cheese thief, but I think I know who did...

Shaela, did you take my cheese?

It wasn't me mom.

Gotcha! The wet, muddy paw gave her away. The only water in the yard was where I rinsed out the bowl I beat the eggs in. A spot she had to stand on to eat my cheese! She's mastered the sweet and innocent look, hasn't she?
S

Very cool design. In a long term SHTF situation, Coleman fuel will become very scarce and propane won't be much better. This is one reason I kept my charcoal grill after I got a gas model for Fathers day. Your design is much more efficient.
F