Here's a blog describing censorship of pro-gun comments on a crusade started by the Coalition to Stop Gun Violence. Warning: part of this includes some rough language by some idiots (who give our cause a bad rap).

Just posted this on one of there threads:
""...nation's inadequate gun laws.": How would you stop a 22 year old with a mental problem that has never went to a doctor for help? How would you stop someone with no background from getting a gun?

If Jared didn't have a gun, he may have used a car, van or truck. If that happened he may have killed and injured even more. Then, how do you prevent him from geting a drivers license?"

Lets see what happens.
B

Maybe some of you have some statisics on murder rates (gun or other) in countries which prohibit ownership for law abiding citizens.
T

Someone just tried to discount me on my grammar with no real argument.
J

This shouldn't be much of a surprise. I don't use facebook, but I did try it out a few years ago just to interact with some folks regarding a protest at Virginia Tech. They were organizing an "anti-gun violence" protest, (as if this isn't the most foolish and transparent straw man protest ever. They like to pretend that there is a group somewhere who opposes them on the grounds of being pro-gun violence. Nonsense.) As I know their real agenda is actually anti-gun, I offered the suggestion that they should change it to an anti-violence protest. I made a compelling argument that picking a single tool of violence was inadvertently offering support to those that committing violent acts with other weapons. Why would you support knife violence?

I'm pretty sure this was a group of well intentioned students (ignorant of the facts, other than the lies presented by the brady bunch) who might have actually given this some thought, until the anti-self-defense loonies got word of it. I was banned. I think one of their members is now on the board of some other brady bunch front group bilking ignorant fools out of their money. They were adsorbed into the collective. Resistance was futile. I believe "useful idiots" is the title those people get.

I've even had civil, thought provoking, pro-gun comments removed from online "news" sites where they require you to login with a facebook ID. I've learned recently that there isn't really any reason to bother with news comments, or facebook arguments. No one changes sides in heated debates. I suspect the comments on quoted on that blog site are from Agent Provocateurs within the brady camp who pose as pro-gun extremists, just to discredit the mainstream of American gun owners.
J

bigfutz said:
Maybe some of you have some statisics on murder rates (gun or other) in countries which prohibit ownership for law abiding citizens.
Click to expand...

Here are a two interesting graphs. The first one is a comparison of homicide rates between the UK and the US. The tool used to commit the homicide is not important, so I'm not too worried about it. The anti's like to use the "gun murder" numbers in their arguments. I guess they feel a murder victim is better off if he's been stabbed to death rather than shot.

Notice how the rate of homicide has been decreasing in the US for two decades, despite the ever increasing number of guns in private hands. Also note how the rate in the UK is increasing despite the constant reduction in legal guns in private hands. The spike in homicides in the UK comes shortly after the Firearms Act of 1997. The criminals really ramped up their murder rate after being told it was illegal to own a firearm. 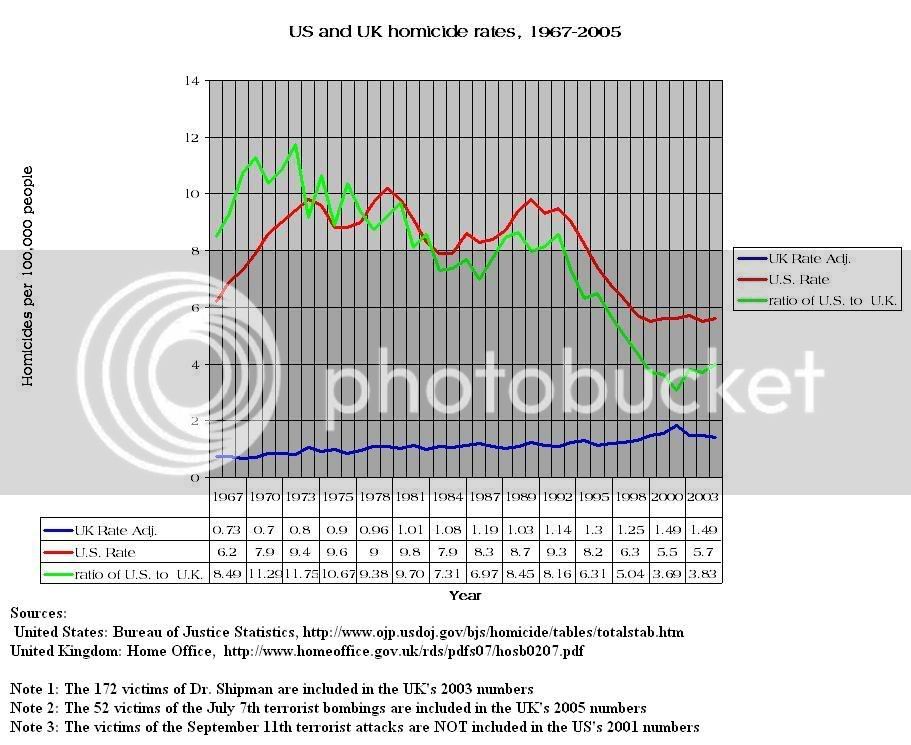 I really like this graph. The anti's love to run around telling people that guns cause suicide. Look at the rate of suicides in Scotland where the rate of gun ownership is very low, to the rate in the US where gun ownership is highest. Those Scots sure do know how to off themselves with things other than guns. 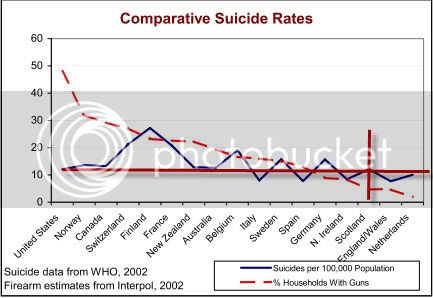 I got off "griefbook" a while back for various reasons but it's not suprising for them to censor. I have no use for facebook, it is nothing but a disease and a waste of time.
T